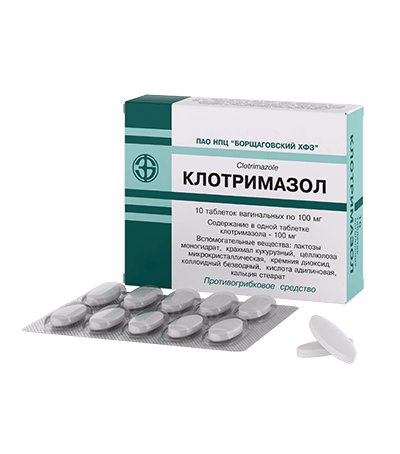 The mechanism of the antimycotic action of imidazole is associated with inhibition of the synthesis of ergosterol, which leads to structural and functional damage to the cytoplasmic membrane. Clotrimazole has a wide spectrum of antimycotic activity in vitro and in vivo, acts on dermatophytes, yeasts, molds. Under appropriate testing conditions, the minimum inhibitory concentrations for these types of fungi are less than about 0.062-8.0 μg / ml of substrate.

The mechanism of action of clotrimazole is associated with primary fungistatic or fungicidal activity, depending on the concentration of clotrimazole at the site of infection. In vitro activity is limited to fungal elements that proliferate; spores of the fungus have only a slight sensitivity. In addition to the antimycotic activity, clotrimazole also acts on Trichomonas vaginalis, gram-positive microorganisms (streptococci, staphylococci) and gram-negative microorganisms (Bacteroids, Gardnerella vaginalis).

In vitro, clotrimazole inhibits the multiplication of Corynebacteria and gram-positive cocci (with the exception of Enterococci) at a concentration of 0.5-10 μg / ml of substrate and has a Trichomonacid effect at a concentration of 100 μg / ml. Initially resistant strains of susceptible fungal species are rare. The development of secondary resistance in sensitive fungi during treatment has so far been observed very rarely.

Infections in the field of genital organs (vaginitis) caused by mushrooms (usually genus Candida) and superinfection caused by bacteria sensitive to clotrimazole.

Increased sensitivity to Clotrimazole or to other components of the drug.

The drug is applied to adults 1 tablet 2 times a day for 3 days or 1 tablet per day for 6 days. Vaginal tablets should be entered into the vagina as deeper as possible, as far as possible, in the evening, it is more convenient to enter lying on the back with a slightly bent legs.

Clotrimazole, vaginal tablets, must be moisturized into the vagina for complete dissolution, otherwise undisguised pieces of vaginal tablets can fall out of the vagina. To prevent this, it is important to enter the drug in the vagina so deep as possible, before bedtime. If the vaginal tablets do not completely dissolve over one night, it should be given to the possibility of using a vaginal cream.

It is forbidden to use tablets orally . Contact with eyes should be avoided.

The patient is advised to consult a doctor if:

Vaginal intercourse should be avoided while using this drug, as the infection can be passed on to the sexual partner. The drug may reduce the effectiveness of latex contraceptives (condoms, diaphragms). This effect is temporary and is observed only during the treatment period. Patients are advised to use alternative methods of contraception for at least 5 days after using the drug.

According to the doctor’s prescription, simultaneous treatment of the external genital organs with 1% ointment or 1% Clotrimazole solution is possible; if necessary, the doctor may prescribe additional systemic drugs (for example, oral metronidazole).

Do not use tampons, intravaginal irrigations, spermicides, or other vaginal agents while using the drug. In patients with impaired liver function, its functional state should be checked periodically.

If there is no effect, a microbiological study should be carried out to confirm the diagnosis and exclude another cause of the disease. Simultaneous treatment of both sexual partners is recommended. It is necessary to use the drug during the entire period of treatment, even if the symptoms of the disease have disappeared earlier. Compliance with these recommendations will help prevent the development of reinfection.