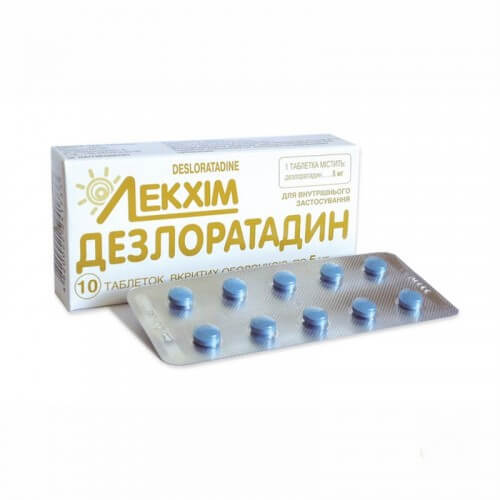 In in vitro studies, the drug has demonstrated its anti-allergic and anti-inflammatory properties on endothelial cells. This was manifested by inhibition of the release of anti-inflammatory cytokines, such as IL-4, IL-6, IL-8, and IL-13, from human mast cells / basophils, as well as inhibition of the expression of adhesion molecules such as P-selectin. The clinical significance of these observations still needs confirmation. In clinical studies of high doses, in which desloratadine was administered daily at a dose of up to 20 mg for 14 days, statistically significant changes in the cardiovascular system were not observed. In a clinical pharmacological study, when using 45 mg per day (10 times the maximum daily clinical dose) for 10 days, no prolongation of the QT interval was observed.

In patients with allergic rhinitis, desloratadine effectively eliminated symptoms such as sneezing, nasal discharge and itching, as well as eye irritation, watery eyes and redness, and itching of the palate. Desloratadine effectively controlled symptoms for 24 hours. The drug almost does not penetrate the central nervous system (CNS). In controlled clinical trials, when taken at the recommended dose of 5 mg per day, the incidence of drowsiness did not differ from the placebo group. In clinical studies, a single dose of the drug in a daily dose of 7.5 mg did not affect psychomotor activity.

Desloratadine effectively alleviates the severity of the course of seasonal allergic rhinitis, taking into account the total indicator of the questionnaire on assessing the quality of life in rhinoconjunctivitis. The greatest improvement was noted on the items on the questionnaire related to practical problems and daily activities that were limited by symptoms. Chronic idiopathic urticaria was studied in a clinical model with urticaria conditions. Since the release of histamine is a causative factor in all forms of urticaria, desloratadine is expected to be effective in relieving symptoms in forms of urticaria other than chronic idiopathic urticaria.

In two placebo-controlled 6-week studies in patients with chronic idiopathic urticaria, desloratadine effectively relieved pruritus and reduced the number and size of urticaria until the end of the first dosing interval. In each study, the effect lasted over a 24 hour dosing interval. Itching relief of more than 50% was seen in 55% of patients taking desloratadine compared with 19% of patients taking placebo. Taking the drug does not show a significant effect on sleep and daytime activity.

Increased individual sensitivity to desloratadine, loratadine and to any component of the drug.

The drug is taken orally.