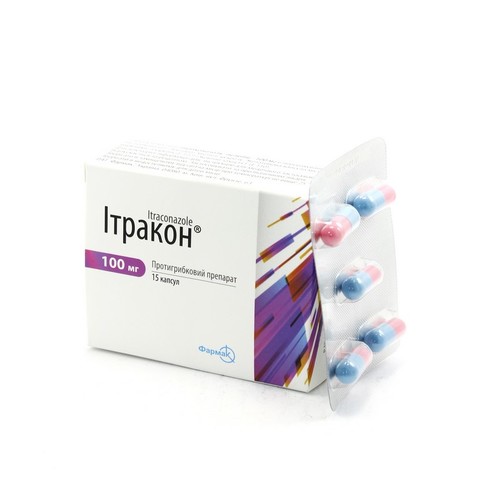 Capsules are contraindicated to patients with known hypersensitivity to a valid substance or any of the aids. The simultaneous use of Itraconazole and CYP3A4 substrates are contraindicated. Simultaneous use may cause an increase in the concentrations of these drug plasma, which can lead to strengthening or prolongation of therapeutic and adverse reactions and states that can potentially threaten life.

For example, the concentrations of these medicines can lead to an increase in Qt interval and ventricular tachyarithmiums, including cases of flickering of ventricles, and potential fatal arrhythmias. Data drugs are indicated in the section “Interaction with other drugs and other types of interactions.” It is contraindicated to the use of hatching capsules to patients with ventricular dysfunction, such as stagnant heart failure, or stagnant heart failure in history, with the exception of the treatment of infections threatening life (see section “Features of application”). It is not necessary to use Itraconazole capsules during pregnancy, except for the treatment of states, Threatening life of pregnant women (see section “Application during pregnancy or breastfeeding”). Women of reproductive age should apply effective methods of contraception during treatment with Itraconazole capsules, as well as to the end of the menstrual cycle after graduation Treatment.

Itraconazole capsules are used inside immediately after eating to ensure maximum absorption.

Capsules should be swallowed entirely.

Detailed diagrams and doses of reception See in the packaging of the drug.

Optimal clinical and mycological effects are achieved 1-4 weeks after the end of treatment for skin infections, vulvovaginal and oropharyngeal candidiasis, and after 6-9 months after completion of treatment for nail plate infection. This is due to the fact that the withdrawal of the drug from the tissues of the skin, nails and mucous membranes occurs more slowly than from blood plasma.