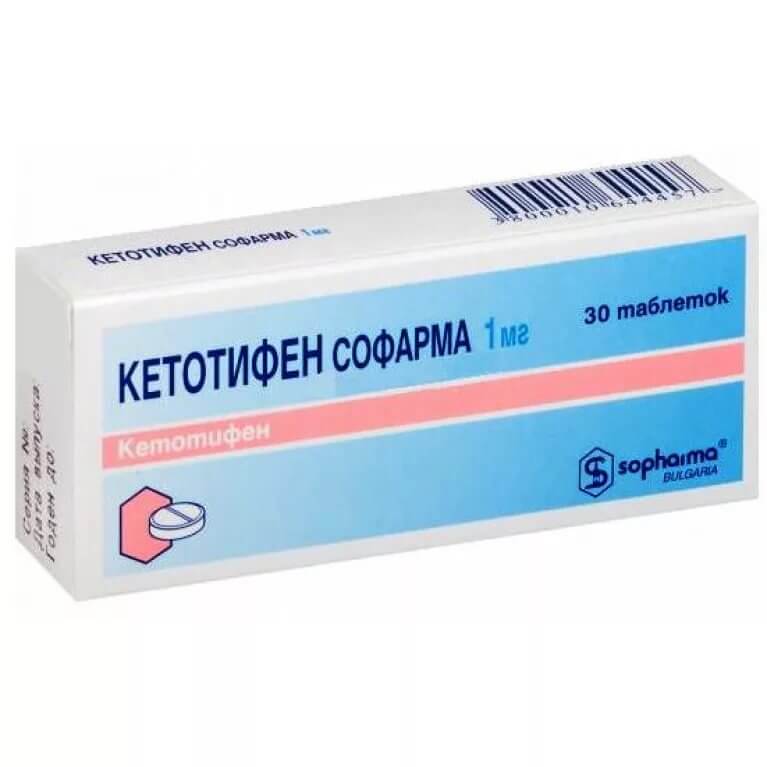 Ketotifen belongs to the group of cycloheptothiophenones and has a pronounced antihistamine effect. It is a non-bronchodilating anti-asthma drug. Its mechanism of action is associated with inhibition of the release of histamine and other mediators of mastatsitam, with blocking of histamine H1 receptors and inhibition of the phosphodiesterase enzyme, resulting in an increase in the level of cyclic adenosine monophosphate in mast cells. Suppresses the effects of TAF (platelet-activating factor). When used alone, it does not stop attacks of bronchial asthma, but prevents their occurrence and reduces their duration and intensity, while in some cases they completely disappear.

The tablets are taken orally during meals with water.

Adults: 1 tablet (1 mg) 2 times a day, morning and evening with meals. For patients who experience significant sedation, it is recommended to slowly increase the dose during the first week, starting from 0.5 mg 2 times a day, and gradually increasing it until the therapeutic dose is reached. If necessary, the dose can be increased to 4 mg (4 tablets), 2 tablets 2 times a day. With a higher dose, a more rapid onset of the therapeutic effect can be expected.

Children from 6 months to 3 years of age: apply ketotifen in a different dosage form (syrup).

Children aged 3 years and older take 1 tablet (1 mg) 2 times a day, in the morning and in the evening with meals.

Treatment is long-term, while the therapeutic effect is achieved after several weeks of therapy.

Treatment should continue for at least 2-3 months, especially in patients who did not experience any improvement in well-being in the first weeks.

discontinuation of therapy: Discontinue treatment with ketotifen gradually, over 2-4 weeks, to avoid the risk of relapse of asthmatic symptoms. Elderly patients. There are no special requirements for elderly patients.

The drug is ineffective in the treatment of acute allergic reactions and asthma attacks. The maximum therapeutic effect of the drug occurs after several weeks of systematic administration. Normalization of the function of the pituitary-adrenal system can last up to 1 year. Therefore, in the first weeks of using ketotifen, it is recommended to continue the previous treatment and cancel it gradually and for a long time.

At the beginning of long-term treatment with ketotifen, you should not suddenly stop treatment with other anti-asthma drugs, especially corticosteroids. In patients with steroid dependence, adrenocortical insufficiency may develop. In the case of intercurrent infection, it is necessary to carry out specific anti-infective therapy.

When treating with the drug, it is necessary to be under the supervision of a doctor, given the possibility of seizures. The drug should be used with caution in patients with a history of epilepsy due to the possibility of lowering the seizure threshold during drug treatment. Alcohol should not be consumed during treatment with the drug, as it enhances the depressive effect of the drug on the central nervous system.

You should stop taking the drug 10-14 days before the skin tests to determine the allergy. If it is necessary to stop treatment, the dose should be gradually reduced over 2-4 weeks to prevent recurrence of asthma symptoms. Caution should be exercised when using Ketotifen in patients with impaired liver function.

Given that concomitant use with oral hypoglycemic drugs can cause thrombocytopenia, such a combination of drugs should be avoided or platelet counts should be carefully monitored if such treatment is recommended. The drug contains lactose, so it should not be prescribed to patients with rare hereditary forms of galactose intolerance, lactase deficiency or glucose-galactose malabsorption syndrome.