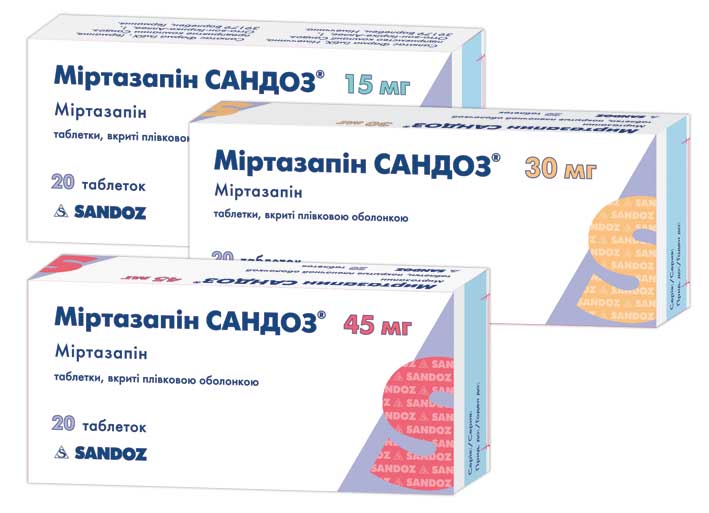 Mirtazapine – tetracyclic antidepressant, also used as an anxiolytic, hypnotic, antiemetic, orexigenic and antihistamine. The drug is an antagonist of presynaptic a2-receptors, enhances central noradrenergic and serotonergic neurotransmission. The enhancement of serotonergic neurotransmission occurs exclusively through 5-HT1 receptors, since mirtazapine blocks 5-HT2 and 5-HT3 receptors. Both enantiomers of mirtazapine have antidepressant activity, with the S (+) enantiomer blocking a2- and 5-HT2 receptors, and the R (-) enantiomer blocking 5-HT3 receptors. Mirtazapine blocks H1 receptors, which leads to its sedative properties. In therapeutic doses, mirtazapine has practically no anticholinergic activity and does not affect the cardiovascular system.

Treatment of states of deep depression.

Hypersensitivity to mirtazapine or to any other component of the drug. Concomitant use of mirtazapine with MAO inhibitors

Adults. The effective daily dose is usually 15 to 45 mg, with an initial dose of 15 or 30 mg. Mirtazapine begins to show an overall effect after 1–2 weeks of treatment. Treatment with an adequate dose will cause a positive response within 2-4 weeks. If the response is insufficient, the dose can be increased. If no effect is observed within the next 2-4 weeks, the drug should be discontinued.

Elderly patients. The recommended dose is the same as for adults. In order to achieve a satisfactory and safe result, an increase in the dose for elderly patients is carried out under the supervision of a physician.

Dosing for hepatic impairment. The clearance of mirtazapine may decrease in patients with hepatic impairment. This fact should be taken into account when prescribing a drug for this category of patients, especially with severe hepatic insufficiency. Treatment should be started with the minimum dose, controlling the clearance of mirtazapine, especially when the dose is increased.

The half-life of mirtazapine is 20-40 hours, so it can be used once a day. It is advisable to use the drug once at night before bedtime. The daily dose can be divided into 2 doses (morning and evening; the larger dose should be taken at night). The tablets are taken orally, swallowed without chewing; if necessary, drink with water. Patients with depression should be treated for a long time, at least 6 months, until symptoms disappear completely. It is recommended that treatment with mirtazapine be discontinued gradually to avoid withdrawal symptoms.

Use during pregnancy or lactation Pregnancy:

Limited data on the use of the drug in pregnant women do not indicate an increased risk of developing birth defects. Animal studies have not shown any teratogenic effects, which are manifested by clinical symptoms, however, there was an adverse effect on intrauterine development. Epidemiological data indicate that the use of selective serotonin reuptake inhibitors (SSRIs) during pregnancy, especially in late pregnancy, increases the risk of persistent arterial hypertension in the newborn (PPHN). Although no studies have examined the association of PPHN with the drug treatment, this potential risk cannot be excluded given the associated mechanism of action (increased serotonin concentrations). It is necessary with extreme caution, given the benefit / potential risk to the fetus ratio, to prescribe to pregnant women. If the drug is used at birth or just prior to delivery, postnatal surveillance of the newborn is recommended to take into account possible withdrawal effects. Breastfeeding period. Animal studies and the limited data available from human studies have shown that mirtazapine is excreted in breast milk in very small quantities. The decision to continue / discontinue breastfeeding or continue / discontinue therapy is based on the benefits for the child and the benefits of the  treatment for the woman. Fertility Data from preclinical studies of reproductive toxicity in animals indicate no effect on fertility when using the drug.